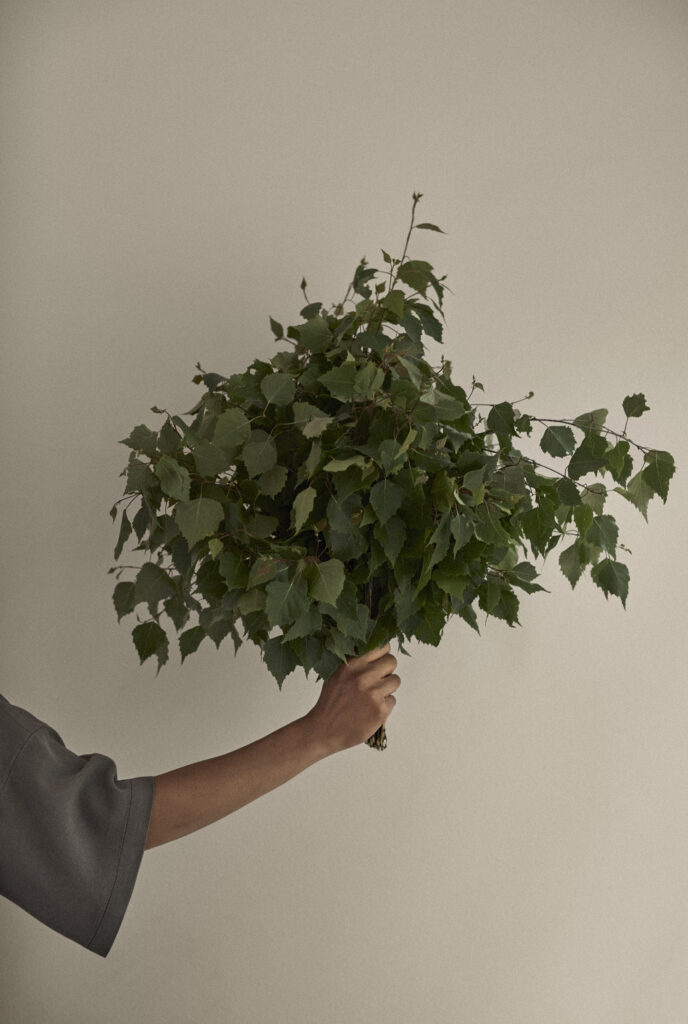 Every Finn is familiar with the scent of a summery birch whisk, which beckons us to enjoy a sauna. Traditionally, all whisks for the whole year were made during midsummer or during the following week.

Whisking is probably the best-known

most impressive and favorite sauna treatment. For Finns, it evokes memories and images – and creates a strong connection with nature. Whisking is one of the oldest sauna treatments. It has been an important part of washing, self-care and various rites. Whisking in the sauna has been used for men, brides, birth-giving women and children.

The ingredients in birch whisks, such as saponins, phenols, sugar and essential oils, cleanse the skin. The whisk can also be used for washing, similar to a sponge or brush. Whisking as such cleanses, stimulates blood circulation and
activates the body’s own healing mechanisms – and of course,
fills the sauna with a wonderful fragrance. Whisks made from different trees have different effects. Different ways of whisking can also lead to different results.

The two Finnish words for whisks, “vihta” and “vasta,” are synonyms

and both names are commonly used. “Vasta” is of Eastern Finnish origin, while “vihta” is part of Western Finnish dialects. Still, both are used about the same nowadays.

are the trees most commonly used for whisks. Silver birches are the most popular trees for whisks. Silver birch is more durable and does not mess up the sauna as much as downy birch. But downy birch gives off a stronger scent in the sauna. For many Finns, birch whisks represent cleanliness and are considered best. Birch saponins foam and remove dirt, while phenols and flavo- noids make the skin soft, and essential oils nourish and invigorate the person being treated. A birch whisk refreshes, strengthens, stimulates blood circulation and relaxes the muscles. Birch is considered a good general cleanser. It strengthens the immune system and has long been used in traditional healing. All parts of the birch tree have been used in treatment – the leaves, sap, ash, bark and birch tar.

Birch has retained its place as the most popular whisk

and is also the most often dried whisk. The best sauna whisks are made of birch branches from the early summer, especially silver birch branches. Traditionally, all whisks for the whole year were made during midsummer or during the following week. The whisks were often made under the direction of the house mistress. In early summer, birch branches are supple. The amount of nourishing substances is at their highest, as the leaves have not yet had time to dry out.

Whisks made of silver birch branches are dried in a cool, dark and dry place to be used in winter. They are hung to dry upside down. Not all deciduous trees are suitable for drying, but apart from birch whisks also oak whisks, for example, can easily be dried. Whisks can also be frozen.

There are many different traditions, customs and preferences for making whisks, all of which are slightly different. Whisks made by mas- ters are works of art, and everybody gives a whisk their own little twist.

Instructions for making a whisk

Look for branches from an environment that is as clean as possible.

Remember, you need the landowner’s permission to collect branches.

Cut branches from different parts of the tree.
The branches need to be long enough so the final whisk is about 50 cm long.

Remove the leaves from the branch ends (about 15 cm) so you can tie them together and hold with your hand.
Arrange the branches with the rough side of the leaves facing outwards.

Finally, tie the branches in two places – at the top and bottom – for example, with a dark string.

Masters use willow or birch twine to tie the branches. But the easiest option for a beginner is to use a string.

Make sure that the branch whisk is tied sufficiently tightly.